Leon’s Triathlon provides participants with an incredibly scenic, flat and fast event experience. Please review the full course information and reference the downloadable maps below. All weekend events are paratriathlete friendly and welcoming to individuals of all ages, abilities and goals. 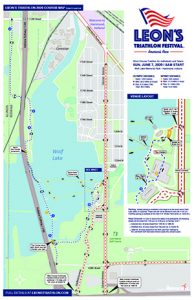 The Transition area is located in the heart of Wolf Lake Park, adjacent to the gorgeous Wolf Lake Pavilion inspired by Frank Lloyd Wright. Each participant has a specifically-designated area to store their gear and bike during the event. Transition is secured by event staff and volunteers before, during and after the event. Only registered individual are able to access this area.

The swim portion is held in Wolf Lake, beginning with an in-water start from the dock immediately behind the pavilion. Participants will have a few minutes to tread water before beginning on the air horn. Buoys will be placed approximately every 100 meters throughout the course. International distance swimmers begin first. They swim a 1,500′ rectangular course, heading southwest from the start dock and finishing at the boat launch near the Transition Area. Sprint distance swimmers will swim an abbreviated version of the same course. Water safety personnel will be stationed along the entire course, providing encouragement and assistance for all.

Leon’s Triathlon features a traffic-free Bike Course, traversing the expansive roadways immediately south and east of Wolf Lake Park. All cyclists must obey the traditional ride-right, pass-left, rules along the entire Bike Course. Single-file riding is required unless making a pass (drafting is not allowed, please consult the USAT rules for details).

Sunday’s Run Course utilizes an out-and-back design along the Wolf Lake Park pedestrian trail. All athletes exit the southwest corner of Transition, run in front of the Pavilion and pass the Swim Exit area where they follow the trail south. Both Sprint and Olympic distance athletes follow the trail around the southern portion of Wolf Lake and cross the Wolf Lake boardwalk section near the Illiana Yacht Club.

Both Sprint and Olympic distance athletes will veer right as they approach the original race venue, following the path into the parking lot and eventually into the Finish Line located just outside the Wolf Lake Park entry gates.

Aid Stations, providing both water and Gatorade Endurance, will be positioned approximately every mile. The paved course is extremely flat and entirely wheelchair friendly.