Established in 1983, this old school Chicago area triathlon is conveniently located less than 30 minutes from downtown Chicago via the Chicago Skyway. The Chicago Skyline provides a picturesque background for the Start and Finish lines, thus providing a great experience for Chicago land triathlon enthusiasts. 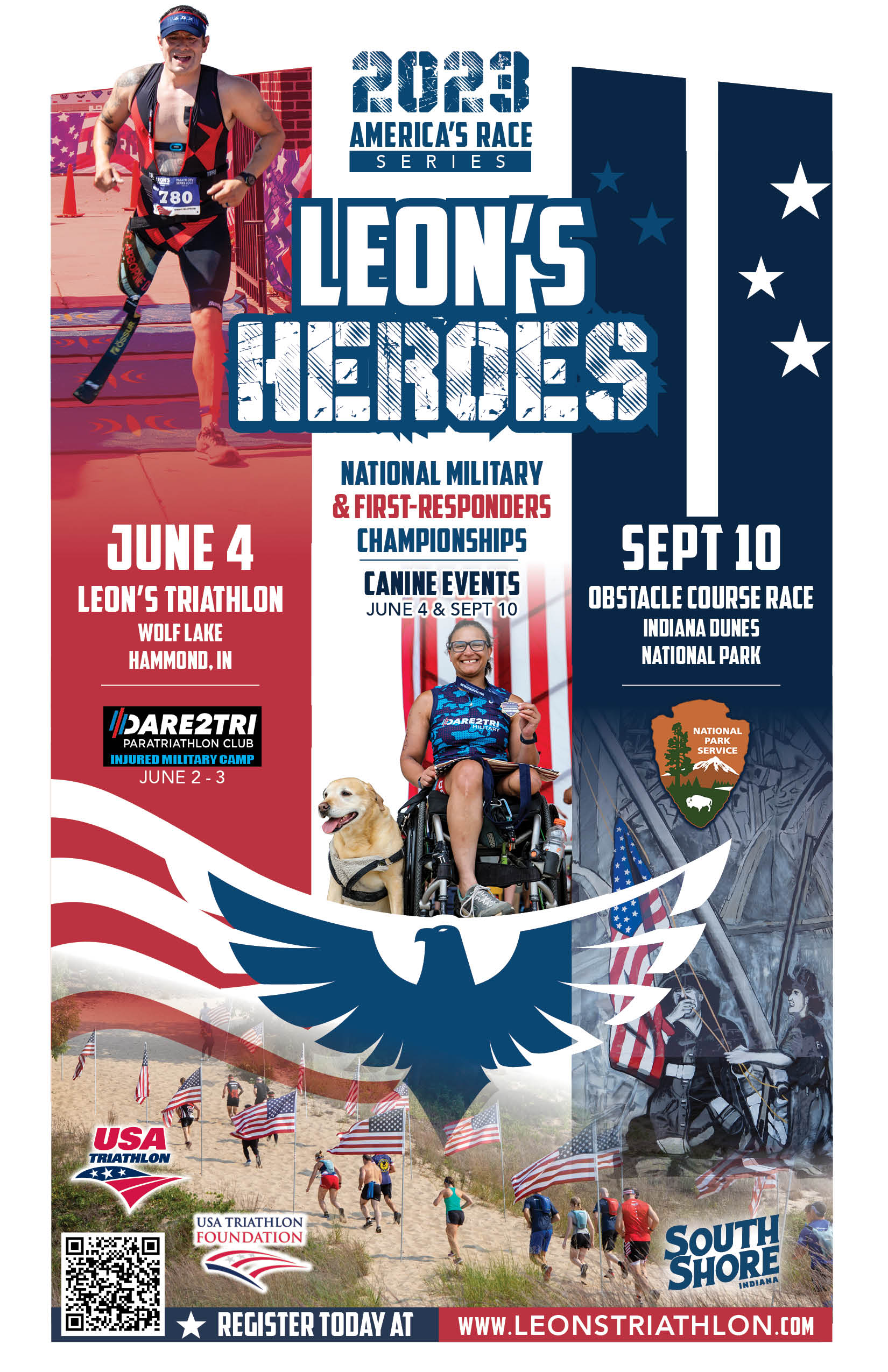 We will have Leon’s Heroes Triathlon on Sunday, June 4, 2023. The excellence of this event can not be overstated. Register now for the race the entire country is talking about, only limited spots available. Registration fee includes American made, union printed, military grade event apparel. Registration is now open.

Come join us to help honor and celebrate those who have served and are currently serving. We love to have families participate and watch our events. But, please note that parents and guardians are responsible for their own children and their safety.
For the September event, there is local camping in the area. We highly suggest that if you are interested in camping, that you make reservations as early as possible. There is a high demand for camping spaces and they fill up quickly and early! 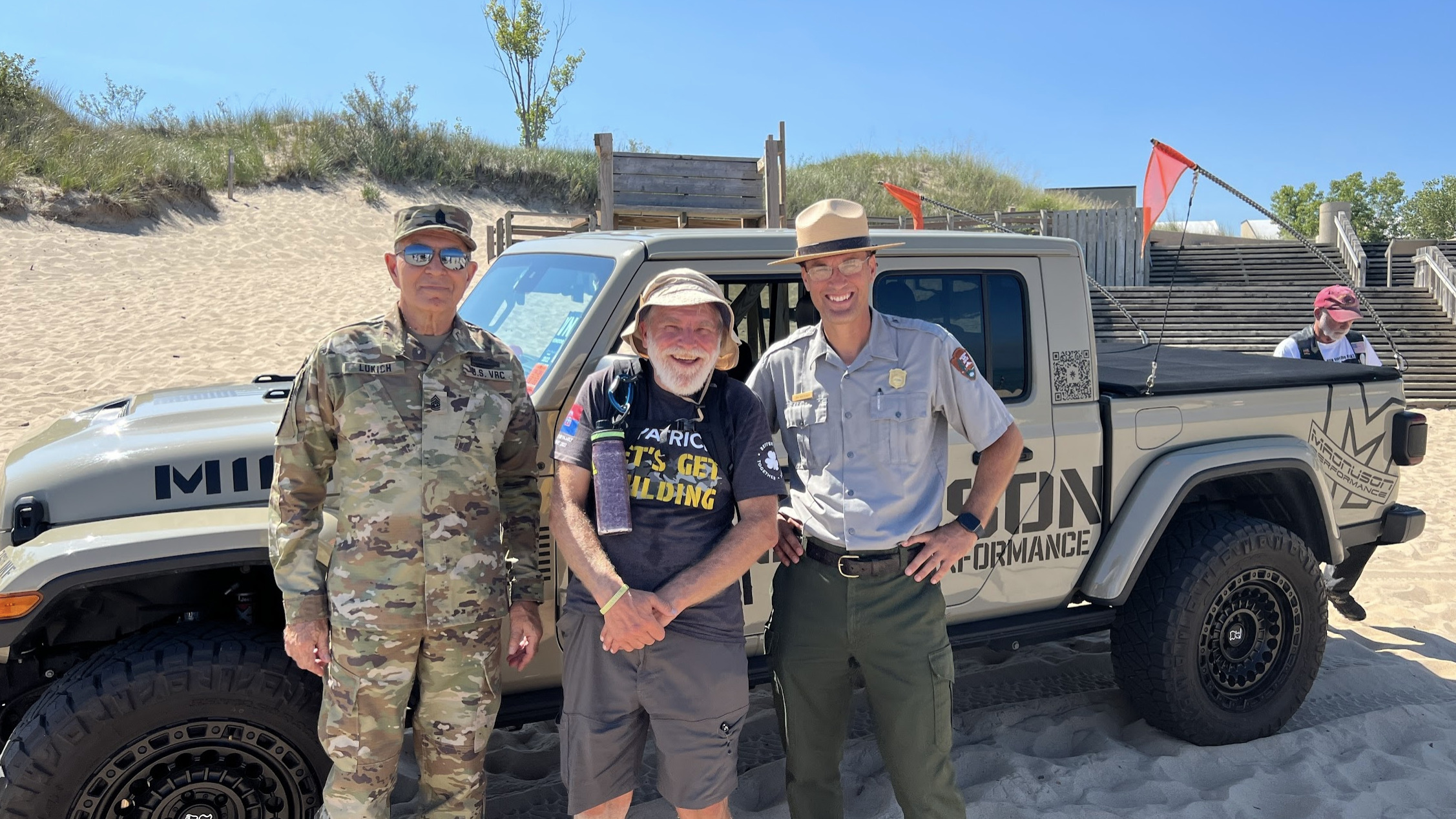 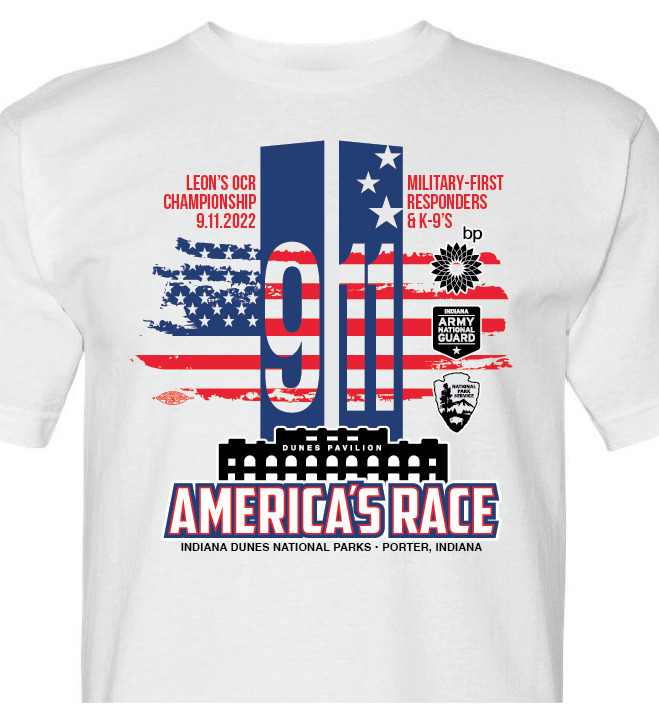 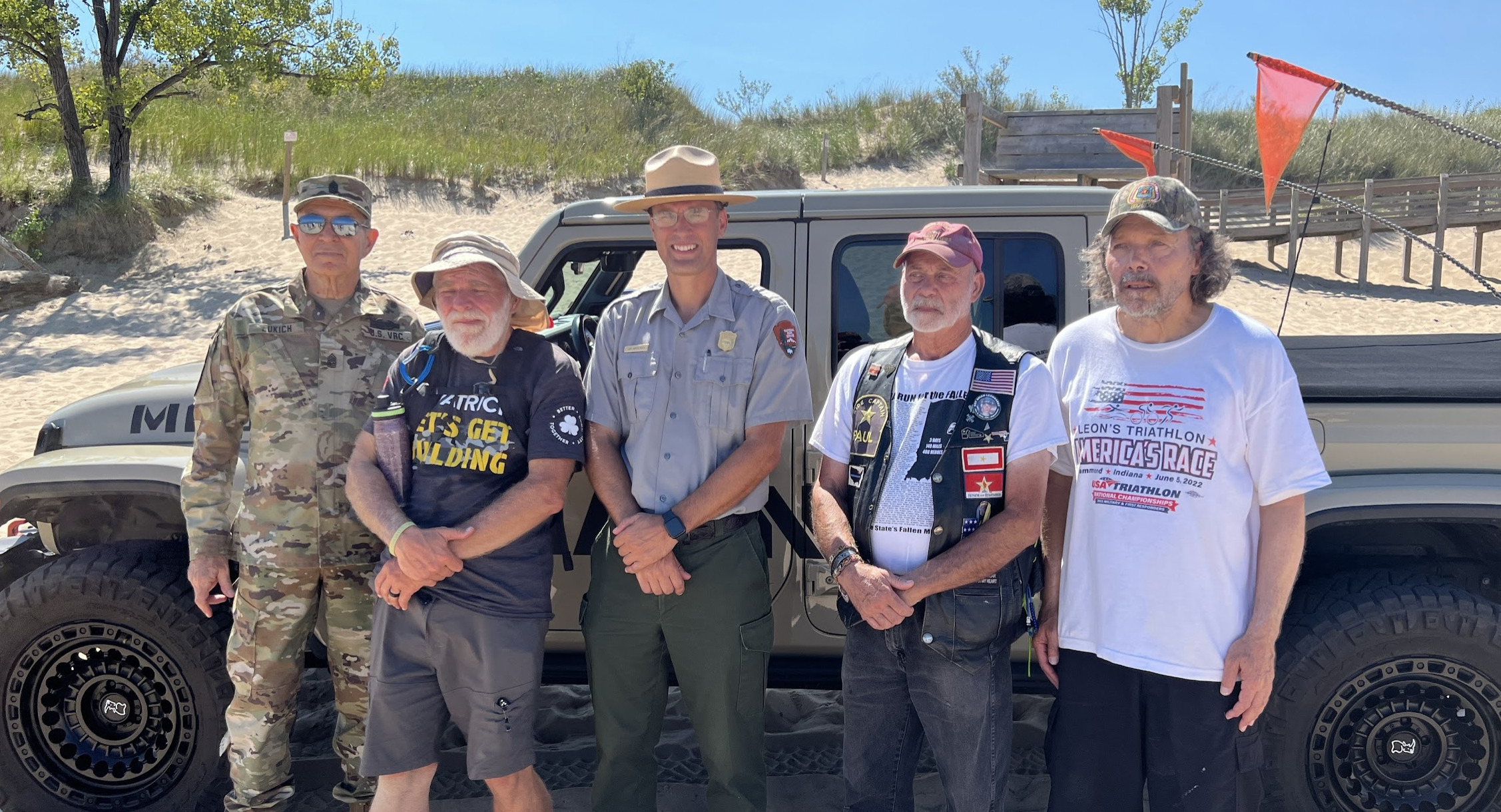 As we seek to honor our American Industrial Athletes, Leon’s has joined forces with Helmets to Hardhats and IKOCC (Indiana/Kentucky/Ohio Regional Council of Carpenters) to create a special, one-of-a-kind event. We are humbled and honored to also team up with all the North American building trades. The Industrial Athlete Championship will be a component of America’s Race. 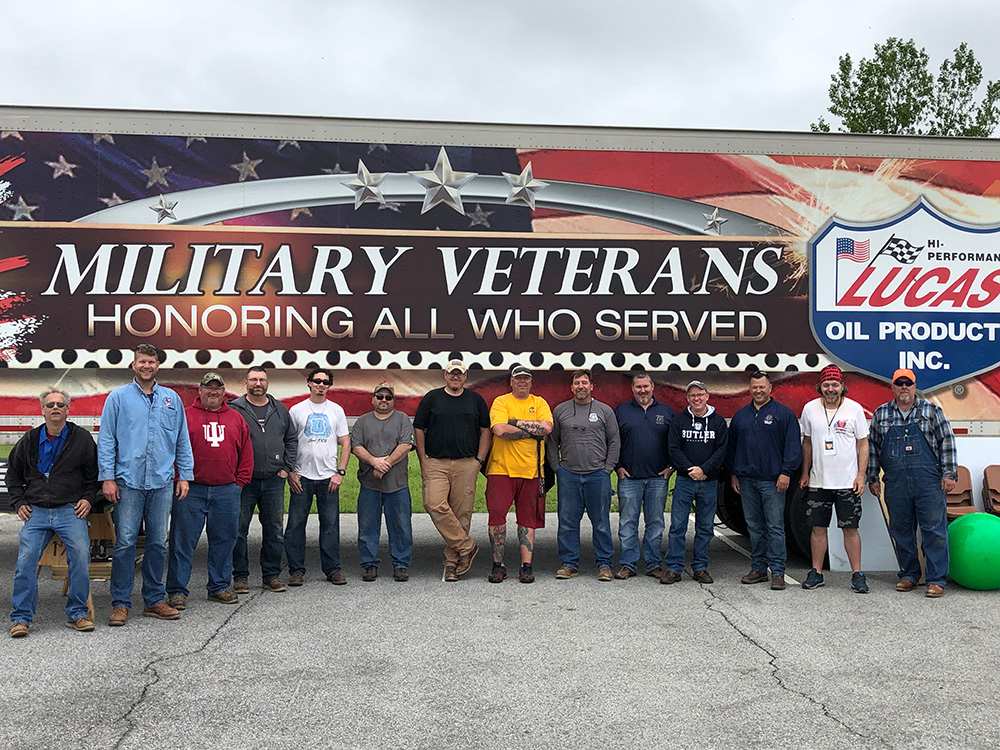 We are so humbled and excited to announce the premier broadcast of “Leon’s Heroes Obstacle Course Race.” This 30 minute, national documentary about America’s Race will give you a glimpse into the work we do to honor our military, veterans, and first responders. 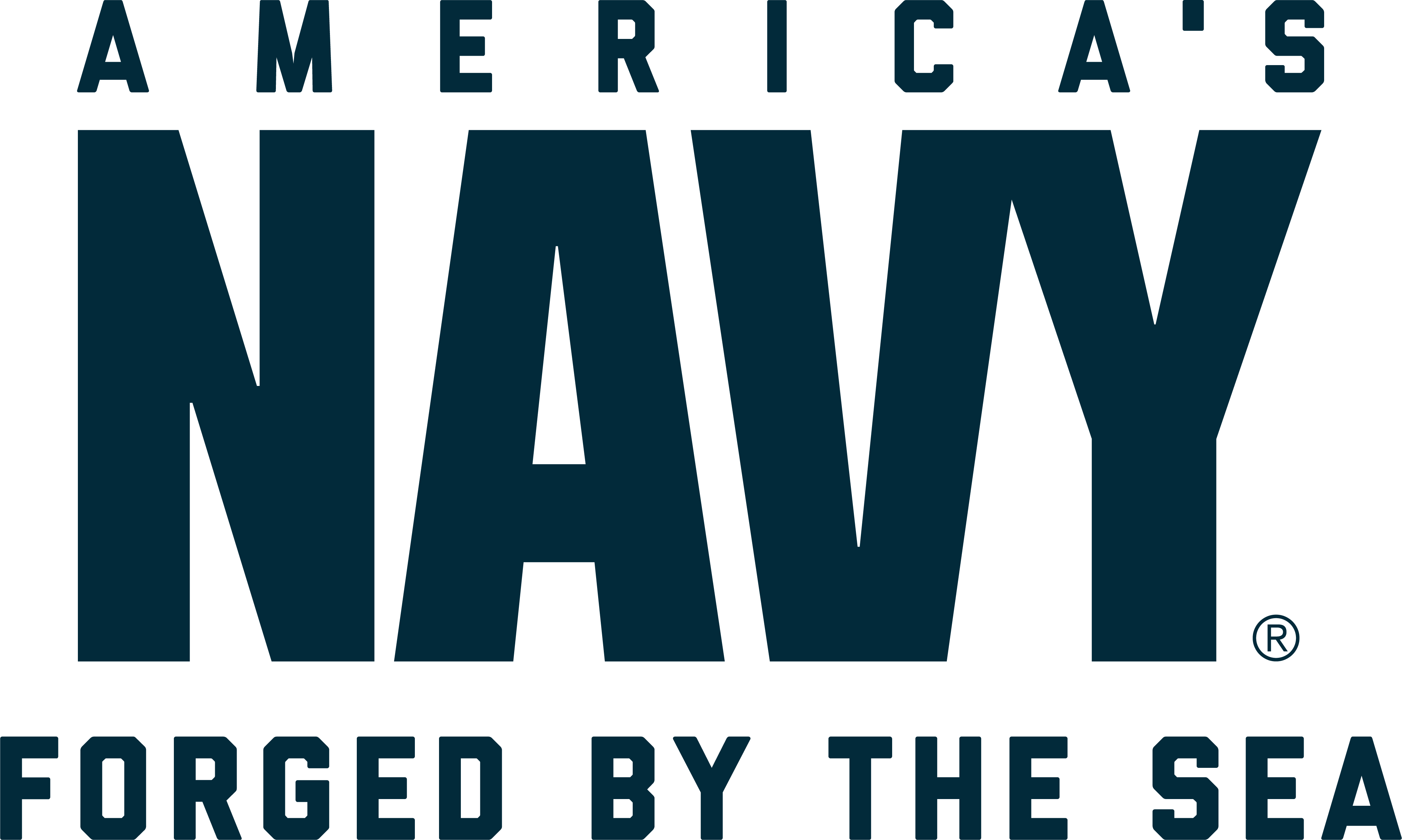 We were humbled and truly honored to be invited to meet with The Golden Knights. The United States Army elite parachute unit is nicknamed The Golden Knights. They are a demonstration and competition parachute team of the U.S. Army. Less than 1% of the population gets to experience meeting this incredible team. Words cannot accurately express what a privilege it was to be in their presence.

Leon’s would like to offer a special thank you to the U.S. Veteran Reserve Corps. Their dedication to our races, as well as to this country, simply highlight who they are. Originally formed back in 1863 as the Invalid Corps, the men and women who are part of the U.S. Veteran Reserves, consists of those who have served honorably and steadfastly in, or retried from, the U.S. Armed Forces, federal, state, and local governments, as well as civilians with specialized professional skills, all of whom share an earnest desire to serve their communities and country.

Their rich and storied past includes guarding over the body of President Lincoln on his final journey to Springfield, Illinois. (See photo below.) They are part of the fabric of Leon’s races, and who they are and what they do links to the heart of the races themselves. We are honored by your friendship and dedication. You can learn more about the U.S. Veteran Reserve Corps by clicking here.

We are honored to present to you the National Broadcast Documentary of America’s Race for 2021. Take some time to watch this broadcast, we think you will be blessed by it and glad that you watched it.

We are pleased to announce our partnership with the LCC K-9 Comfort Dogs. It is a national human-care ministry embracing the unique, calming nature and stills of purebred Golden Retrievers. They are doing amazing work with our military and veterans. Learn more by clicking their logos below. 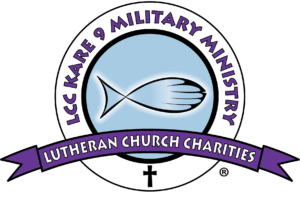 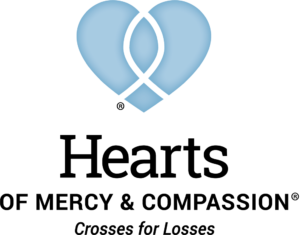 Leon’s Heroes is an organization that is a new branch of Leon’s Triathlon. Leon’s Heroes aims to promote patriotism and honor the U.S. Military, Veterans, First Responders and Law Enforcement.

Leon’s Heroes are the men and women who put their lives on the line to defend our nation and constitution. We aim to create a feel of patriotism anywhere we go.

Leon and his family noticed that all of the major events focused on the pros and not the amateurs. They thought the amateurs needed to be showcased, so they pioneered the First National Amateur Championship, which to this day continues in the sport. They also hosted one of the First Military Championships in the sport. Both were televised on ESPN worldwide and had Military flyovers after the singing of the National Anthem. Because of its completely closed course, the closing of a six lane freeway, and all three events starting and finishing at the same staging area, Leon’s Triathlon came to be known as the fastest triathlon in the world.

Because of economic development and political changes, there were some challenges that resulted in the racecourse logistics. The Wolek family felt it was time to retire the Leon’s Triathlon’s.

Throughout the next 15 years people wrote, called and emailed asking when Leon’s Triathlon would be back.

Leon finally decided to request a meeting with the current Mayor of Hammond, Tom McDermott Jr. Because of the support from his father, Mayor McDermott Sr., his son grew up knowing all about Leon’s Triathlon, known as America’s Race. Like his father he gave his support and after a 15-year hiatus, Leon’s is back.

While growing up Leon didn’t have Superman or Batman as a hero, it was his father and military buddies at the American Legion Post 454 in New Chicago, IN who inspired him. Leon’s Heroes are the men and women who put their lives on the line to defend our nation and constitution. We aim to create a feel of patriotism anywhere we go. 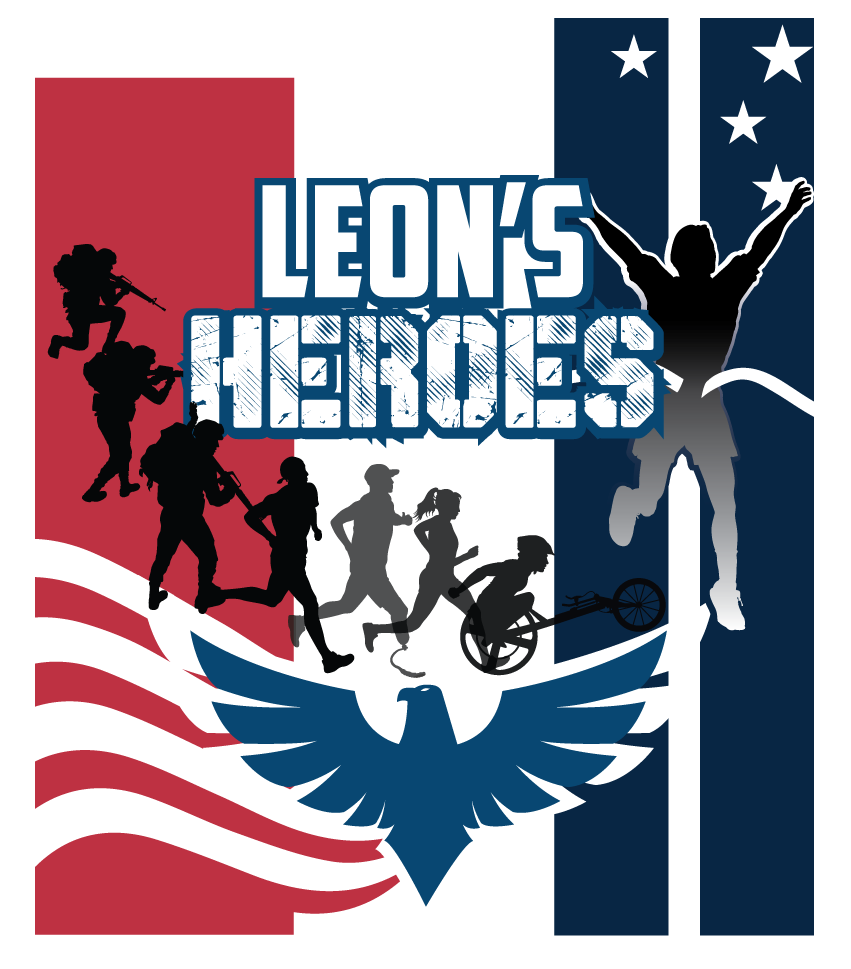 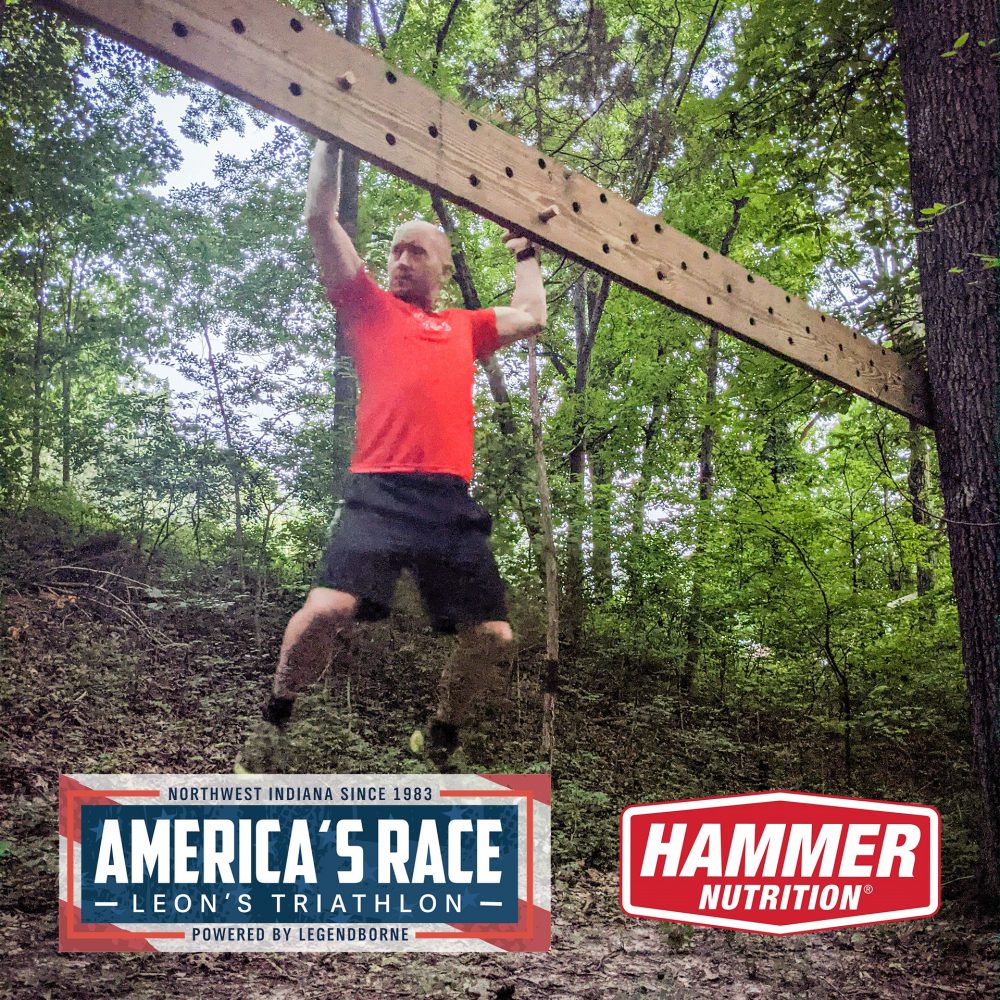 Hammer Nutrition provides unparalleled products, knowledge, and service to health conscious athletes all over the world. Over the years, the product line has grown from fuels & supplements to now include clothing, body care products, EMS units, accessories, and more. 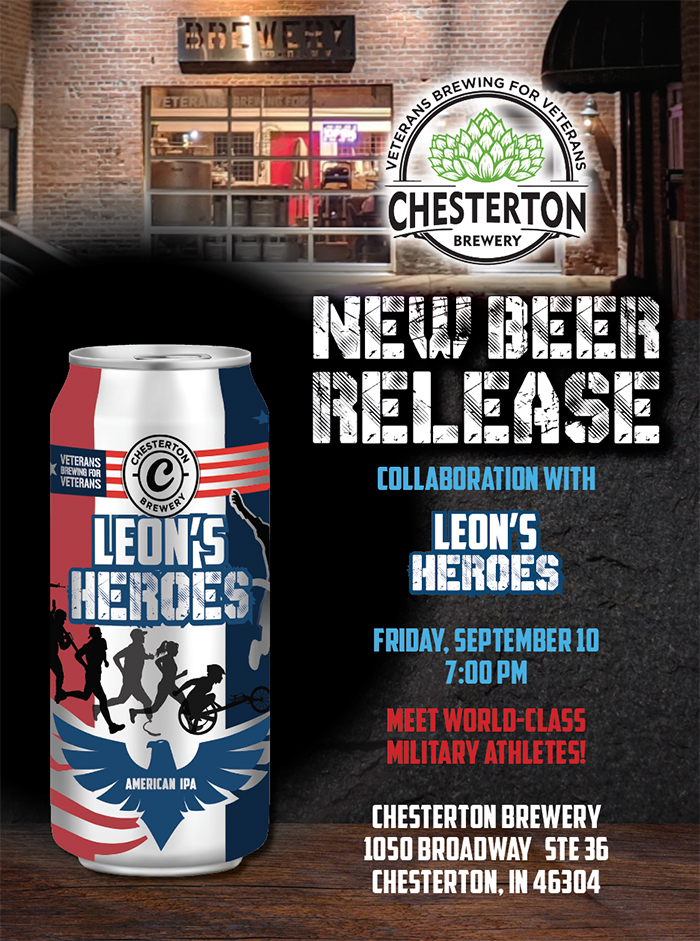 We are so excited to announce our new collaboration with Chesterton Brewery. They have created a new American IPA that was released on Friday, September 10, 2021 in honor of our heroes. 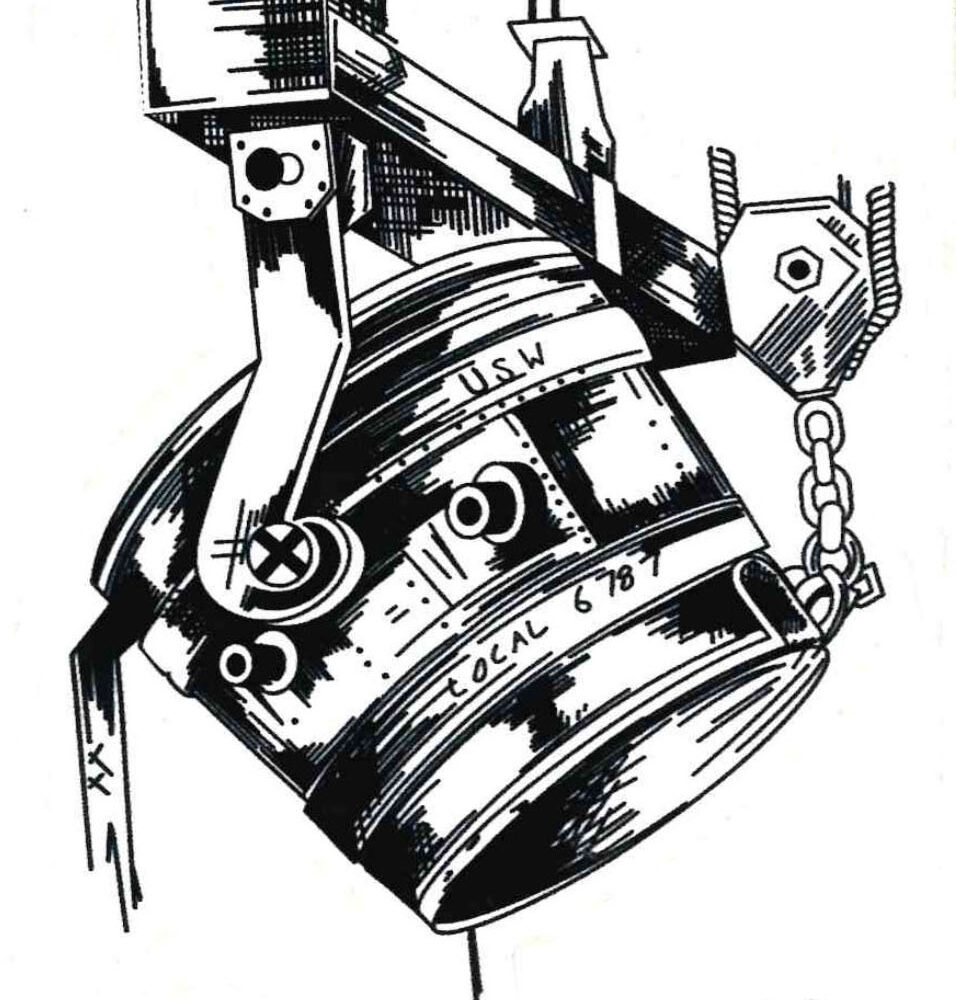 We would like to extend a heart-felt thank you to our friends at United Steelworkers Local 6787. We are grateful for your support in our work.

Leon’s Triathlon and Dare2tri- a Partnership for Injured Veterans

Dare2tri is proud to partner with Leon’s Triathlon to offer an official Dare2tri Race2Raise Team. When you join Dare2tri Race2Raise you get to achieve your own health and wellness goals and support Dare2tri athletes, many of whom are injured military, in achieving their goals. Dare2tri transforms the lives of people with physical disabilities by helping them get active through the sport of triathlon.

Set a goal, challenge yourself and while doing so, you make a difference in the lives of injured veterans so they too can set and reach goals.  Race alongside these amazing men and women and support one another on the journey to the finish line! 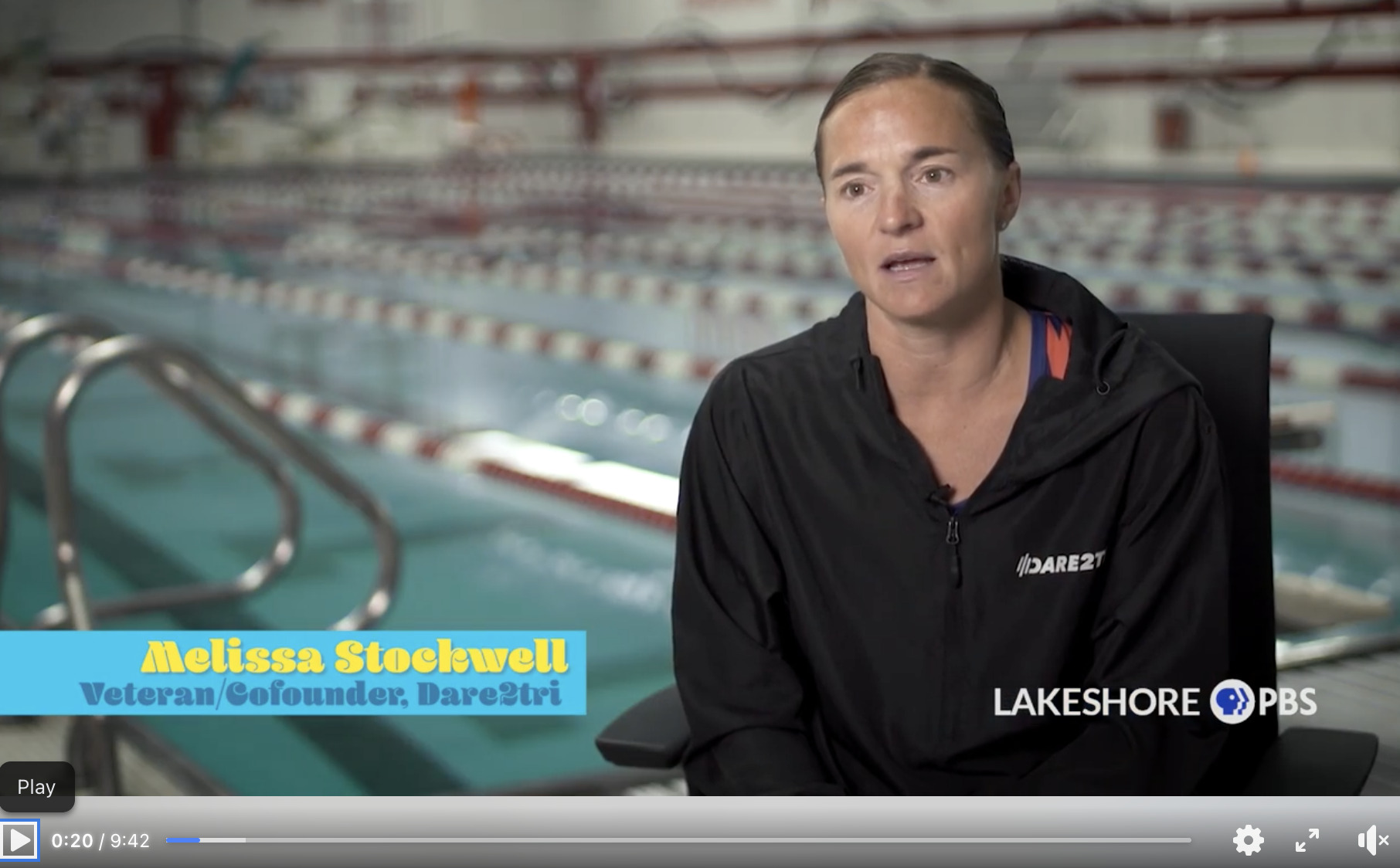 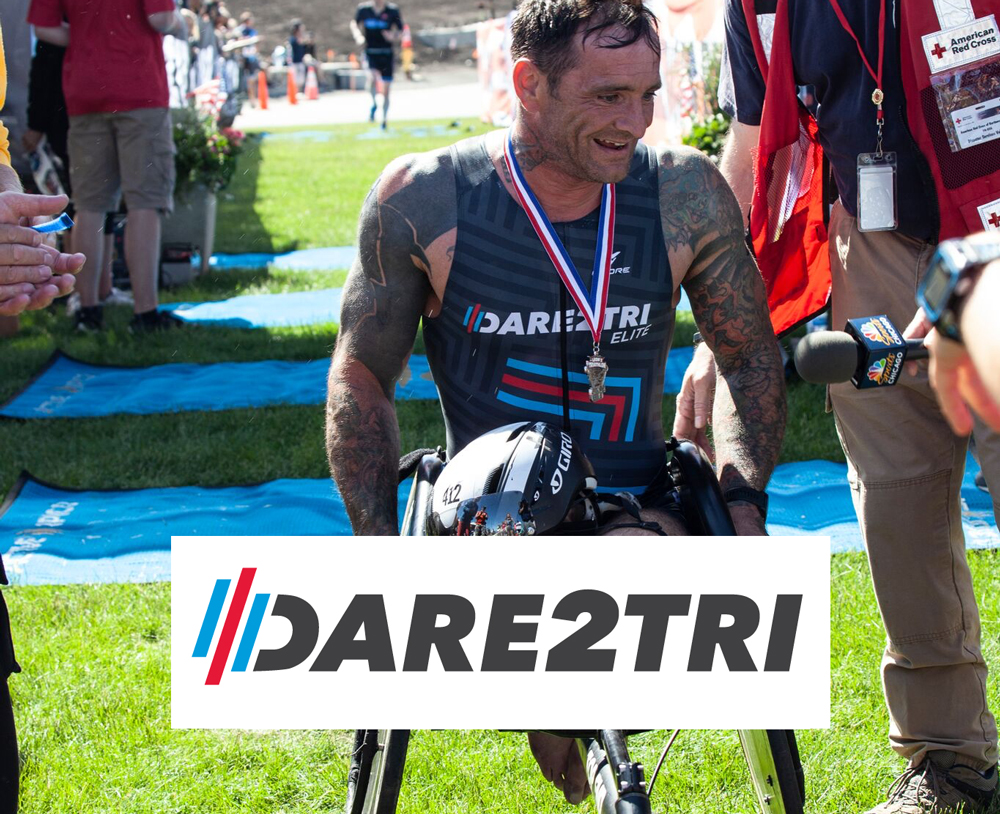 Get help, or make a difference! 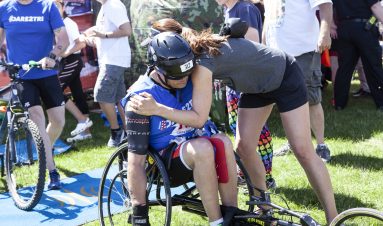 Help make a difference in the life of a Veteran- volunteer for Leon’s Triathlon! 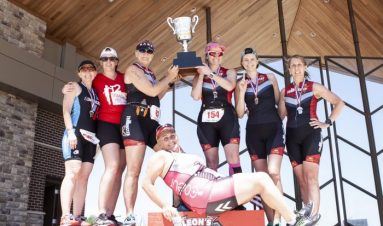